Dub Champions Festival launches in Amsterdam on Saturday 8th February 2014 @ OT301 directly after the Vienna edition. With live dub performances & education events from the #reggae roots of #dub to the future of electronic #bassmusic. Subatomic Sound has enlisted True Soldiers Productions and a heavyweight lineup of artists from around the world to get things rolling in our effort to expand the global community of this music and culture we love, one subwoofer at a time. Check for details and get on our mailing list at www.DubChampions.com 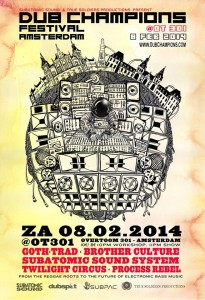