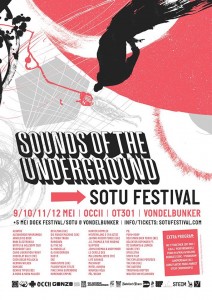 The SOTU is a five day festival in Amsterdam, which is happening 5, 9, 10, 11, 12 May 2013 in a collaboration between venues OCCII, OT301 and Vondelbunker. On the 5th of May we collaborate with the Doek Festival on a night in the Vondelbunker. In 2012 we celebrated a succesfull first edition with around 90 acts and performances over 4 locations.

The festival concentrates on alternative and independent music culture with noise, indie rock, psychedelia, avant-garde, bass music, improv jazz and underground dance. Also included within the program are documentaries, workshops, art and performances. This second edition is realized thanks to the dedication and contributions from 25 organizations, collectives and curators. 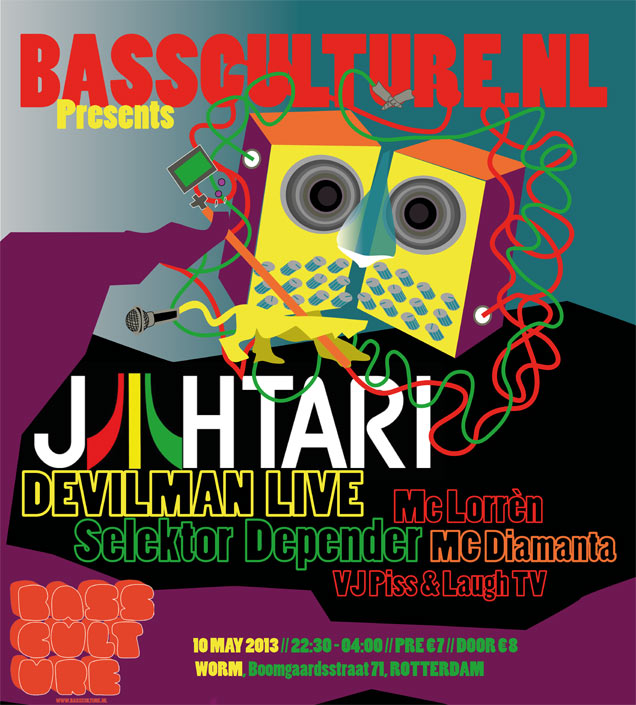 Founded by OG Jahtarians Rootah and Disrupt back in 2004, the now multi-faceted performance and recording Project “JAHTARI RIDDIM FORCE” has become the focus of the Jahtari label live show. Armed with an assortment of analog synthesisers, an MPC and a gameboy, the group performs the full range of the Jahtari Back Catalog. From the classics through to Unreleased Gems and Stomping Dub plates.

What had started as the premier DLR (Digital Laptop Reggae) duo has since evolved into live band (of who’s primary members consist of its founders, a scruffy London based session keyboardist called jackson and Leipziger Sound host Dr Dressla) who regularly team up with Legendary Deejays Such as Tikiman, Solo Banton, Mr Williamz, Soom T and Speng Bond and tour extensively with their unique style of punch card computer reggae!

Shaping new terrain for noise bass music, DEVILMAN comprises three individuals harvested by a secret underground organization fronted by the mysterious Mr D. Fuzzed out sound-system bass (DJ Scotch Egg) rides ferocious drum programming and dubwise from Dokkebi Q’s Gorgonn. Distill this through the psych-noise freak vocal of Bo Ningen’s Taigen Kawabe and you have a sound that is hard to ignore: head nodding yet abrasive; infectious and expansive; noise-inflected live- dub destruction. Living up to their namesake, the legendary Japanese comic/animation, this is the sound track of a world being turned inside out.