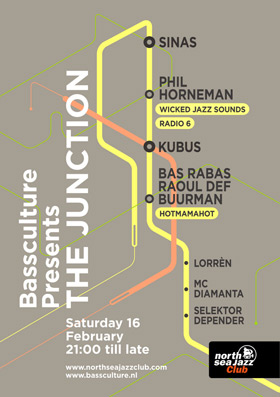 The program will start in the early evening with the exclusive live act by Sinas’ 8 musicians and the guest star Zanillya, presenting their new single: ‘Free Energy’. The night continues with a live performance by Phil Horneman and Lorrèn (Wicked Jazz Sound), followed by Kubus’ set and various sides acts along the evening with Hotmamahot DJ’s collective.

Live musicians, DJ’s and performers will guarantee the finest dance floor shakers from tomorrow and wicked tunes from the past. MC Diamanta and Lorrèn are the hostesses for the night and will bring the audience through a unique journey with heavenly vocals. No stroboscopes, but more candles. Some jumping, but more wining. Few mash-ups, but more love-ups…

Sinas is an 8-piece live band founded in 2006, drawing inspiration from musical styles such as balkan, afro beat, cumbia, reggaeton, ska, rai, funk and dance: global dancefloor music. The band represents: driving beats, irresistible grooves and catchy melodies from all over the world by bringing together different cultures and influences to create their distinctive global dancefloor music. After releasing their debut Global Explorations in 2008, things happended fast with Sinas: performing on numerous festivals and stages, airplay on national radio and television.

But that’s not enough for Sinas, so they took it even further on the follow-up album: Intergalactic Freedom. Their music and live performance embrace the variety of different cultures, people and music worldwide. On the 16th, the band is exclusively presenting their new track: ‘Free Energy’, a blend of greek-Tzigane-singing and papiamento-raps. The new single, not released yet, will be presented live by Sinas and the talented hip-hop singer/composer gueststar Zanillya. Wouter Schueler – saxophones, Aristo – trumpet & vocals, Hassie Dune – bass, Maarten Helsloot – keys, Jan Wouter Oostenrijk – guitar, Jos de Haas – timbales & other percussions, Frank van Dok – conga`s, Bas Bouma – drums.

For more almost 10 years Wicked Jazz Sounds has been responsible for people dancing with a smile.  The first time we hear from Wicked Jazz Sounds (WJS ) is in 1998 in the format of a local radioshow hosted by Phil Horneman. A year later Phil starts throwing parties under the WJS banner in different location and slowly after becomes best known for the weekly Sunday clubnight in the Amsterdam Sugar Factory, and of course for the 7 volumes of the CD compilations by the same name. For Phil the most important value in life is music. His sets reflect his eclectic upbringing, including everything from original jazz to house to soul to hiphop to drum & bass to funk and beyond.

Kubus is an ‘underground’ electro-hiphop-producer from the Netherlands. Kubus has got his roots in electro, techno and drum & bass. He is assigned to the biggest Dutch hiphop-label called TopNotch. He became wellknown for his collaborations with DuvelDuvel, Opgezwolle, Typhoon and Jawat!. His first breaktrough came with the track Doe Je Wat Je Doet for Opgezwolle. For this track he worked together with rapper Sticks from Opgezwolle and they eventually recorded an album together. A year later TopNotch released Kubus’ first solo album called Buiten Westen. On this record he has some guest rappers like DuvelDuvel, Typhoon, Jawat!, Rico and Sticks. It’s a first, that a hiphop producer drops a solo album in the Netherlands.

Best known as dancefloor terrorists Raoul Def Buurman & DJ Bas Rabas are the hardest working record diggers from the young generation, and have built up an incendiary dancefloor reputation. Both are part of a creative masterminds collective, Hotmamahot which have been populating the old yellow pump station in Amsterdam-North, where they organize workshops like sushi-making, lead by an Okura chef, bingo for children, and also assist at numerous other events and parties in Amsterdam. Hotmamahot collective started out back in the years as a small group of friends and now became underground giants in the Amsterdam party scene…