WIN TICKETS! We can give away 1 x 2 tickets among the people who will send a message to info@bassculture.nl with their name and email address. Winner will be picked randomly and announced next Sunday 18th. Share the word as Amsterdam needs di vibeZ! Good luck & till soon***

Mala (aka Digital Mystikz) is a producer, DJ, label owner and visionary. A devotee of Jamaican sound system culture, Mala led from the front as the first waves of so-called ‘’dubstep’’ filtered out from Croydon’s Big Apple Records, battering bassbins across South London in 2002/03 alongside the likes of Skream, Benga, Coki and Loefah. Fiercely independent, he co-founded the label and legendary club night DMZ (with Coki and Loefah) and has produced some of the scene’s most vital and acclaimed tracks as Digital Mystikz. He also established his own imprint – Deep Medi Musik – in 2006 as an outlet for his own sonic experimentations alongside those of his favourite producers. Mala is universally respected as an innovator and leader not only within the global dubstep movement but also within the broader electronic realm.

In May 2011 Mala travelled to Havana, Cuba with Gilles Peterson to record and collaborate with local musicians. The results are documented on his album ‘Mala in Cuba’ – released on Brownswood Recordings. The album will be preceded by a 12’’ featuring ‘Cuba Electronic’ and ‘Calle F’ released on 6th August 2012. Limited 4 piece 180g gatefold vinyl // CD // Digital**Ltd. 4LP box set // SOLD OUT. The results of a true culture clash, ‘Mala in Cuba’ marries the intricate rhythms and deep, spiritual roots of Cuba with Mala’s own roots in South London and his dedication to bass culture.

With an eclectic arsenal of samples and an ear for international sounds, Onra is a beatmaker based in Paris, France. Reminiscent of crate-diggers like Madlib and DJ Shadow, Onra peppers his beats with exotic sounds from Vietnam and India, giving his sound an international flair. The French producer released his debut album, Tribute, in 2006 on Bo Bun Records, then followed up the next year with the critically acclaimed Chinoiseries, which was released on both Favorite Recordings (LP) and Bo Bun (CD). Continuing to stay productive, Onra released 1.0.8 in 2009 on Bo Bun before switching to All City Records in 2010 for the release of Long Distance. In 2011, the beatmaker released Chinoiseries, Vol. 2. ~ Gregory Heaney, Rovi. 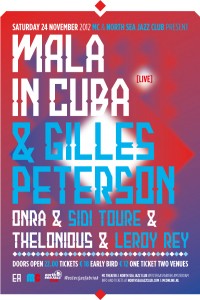